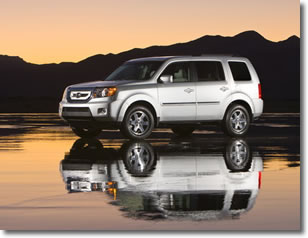 “Honda is honored to earn both of these prestigious awards,” said John Mendel, senior vice president of American Honda Motor Co., Inc. “The fact that we are the only full-line automaker that has the highest possible frontal and side impact ratings for every light truck in our lineup shows our clear leadership in the industry and commitment to safety at every level.”

Every new Honda light truck, five vehicles total, has achieved NHTSA 5-star frontal and side impact crash safety ratings since the 2007 model year. Honda is the only full-line brand to ever achieve the highest-possible side and frontal impact crash safety ratings for every light truck in its entire lineup. All 2009 Pilots include the Advanced Compatibility EngineeringTM (ACETM) body structure in the front of the vehicle that helps to further enhance occupant protection in frontal collisions between vehicles of different sizes.

The 2009 Pilot’s standard safety equipment includes Vehicle Stability AssistTM (VSA®), commonly referred to as electronic stability control, with traction control and ABS; three-row side curtain airbags with a rollover sensor; dual-stage, dual-threshold front airbags; a driver’s front side airbag, and a front passenger’s side airbag with an occupant position detection system. The Pilot is equipped with four Lower Anchors and Tethers for CHildren (LATCH) positions - more than any other SUV currently in the segment.