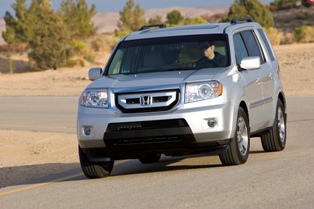 LINCOLN, Ala. – The all-new, Alabama-built 2009 Honda Pilot arrives at Honda dealerships nationwide today, marking the start of customer sales of the innovative sport utility vehicle made only at Honda Manufacturing of Alabama (HMA).

“Today, Honda customers can now share the pride that our 4,500 associates have in building and producing the 2009 Honda Pilot,” said Mike Oatridge, vice president at Honda’s Alabama facility. “After years of research, design and testing, the new Pilot is ready to meet the challenge of our competition and exceed the expectations of Honda customers.”

Honda’s Lincoln facility is the exclusive global production source of both the Pilot and the Odyssey minivan. The Lincoln plant also produces the V-6 engines for each vehicle. Exclusive production of the 2009 Pilot began on April 15, 2008.

The first generation Pilot, which was introduced in the summer of 2002 as a 2003 model, has been sold to more than 750,000 customers. The second generation Pilot is designed to be an ‘intelligent adventure vehicle’ by meeting the practical needs of a family with its eight-passenger seating and offering bolder SUV styling, a more clever interior package and advanced technologies for safety, fuel efficiency and convenience.

The all-new, completely-redesigned 2009 Honda Pilot is set to debut with a Manufacturer’s Suggested Retail Price (MSRP) starting at $27,595, plus destination and handling, for the well-equipped Pilot LX – the same as the 2008 model’s price entry point, American Honda Motor Co., Inc., has announced.

“The timing is right for a vehicle like this as fuel prices drive families out of larger SUV’s even though their lifestyles still require the type of functionality that Pilot delivers,” said Dick Colliver, executive vice president of American Honda Motor Co., Inc. “Advanced engine technologies help improve fuel efficiency while the interior has become even more comfortable and accommodating than the previous model.”

Designed to occupy a unique position within its segment, the second-generation Pilot combines traditional SUV attributes of ruggedness, standard towing capability and functionality with the fuel economy, handling and refinement characteristics that have made crossovers popular.

The 2009 Pilot offers an authentic SUV exterior design while further enhancing on-road refinement and increasing interior functionality. A modern, stylish and spacious interior provides room for up to eight passengers while also providing more space behind the third row for items as large as a mid-size cooler or a folded stroller.

New standard engineering features on all models include a more-powerful, 250 horsepower, 3.5-liter i-VTEC V-6 engine with the latest generation of Variable Cylinder Management™ (VCM®) that works in 6-cylinder mode for performance and 3- or 4-cylinder mode for fuel efficiency. Additional new standard equipment includes a Class III hitch, hill start assist, larger 17-inch wheels and tires (+1-inch) and a lift-up glass hatch as part of the tailgate. New interior features include a telescopic steering column, enhanced audio systems and much more. The Honda DVD Rear Entertainment System™ is available on the Pilot EX-L and Pilot Touring. The new Pilot Touring edition introduces upscale features that include a power tailgate, Bluetooth® HandsFreeLink® and a USB audio interface. Keyless entry, power windows, power locks and cruise control are standard on all models.

The Pilot achieves an EPA-estimated[iii] city/highway/combined fuel economy of 17/23/19 miles per gallon on two-wheel-drive models and 16/22/18 miles per gallon on four-wheel-drive models. The available, fully-automatic VTM-4 four-wheel drive is designed to deliver decision-free operation for all-weather traction and medium-duty off-road capabilities.

Standard safety equipment includes the Advanced Compatibility Engineering™ (ACE®) body structure; Vehicle Stability Assist™ (VSA®), also commonly referred to as electronic stability control, with traction control and ABS; three-row side curtain airbags with a rollover sensor; dual-stage, dual-threshold front airbags; a driver’s front side airbag, and a front passenger’s side airbag with an occupant position detection system. The Pilot is equipped with four Lower Anchors and Tethers for Children (LATCH) positions - more than any other SUV currently in the segment.

HMA builds the Odyssey minivan on both Line 1 and Line 2, while Pilot sport utility vehicle is built only on Line 2 at the $1.4 billion Lincoln facility. Annual production capacity is 300,000 vehicles and V-6 engines.

Alaska . These functions include but are not limited to automatic clock updates and time zone adjustments.

[iii] Based on 2009 EPA mileage estimates, reflecting new EPA fuel economy methods beginning with 2008 models. Use for comparison purposes only. Do not compare to models before 2008. Actual mileage will vary.