HMA Associates “team up” to “clean up” roadside litter 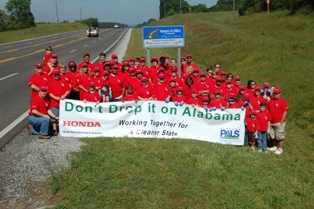 LINCOLN, Ala. – More than 70 Honda Manufacturing of Alabama (HMA) associates and their family members took to the roadsides in Lincoln on May 17 to pick up litter as part of the “Don’t Drop It On Alabama” Spring 2008 Cleanup. The result: nearly 4,000 pounds of litter was collected.

Honda teamed up with Alabama PALS (People Against A Littered State) and the Alabama Department of Transportation to sponsor the spring cleanup campaign statewide. This year’s litter control program involved more than 25,000 volunteers in 57 counties. Because of Honda’s support, Alabama PALS distributed more than 150,000 trash bags and other “Don’t Drop it on Alabama ” branded items to cities, counties, schools and communities all across the state for this year’s cleanup. Equipped with gloves, pickup sticks and trash bags, Honda volunteers took to the roads and areas surrounding the Lincoln plant at 8:30 a.m., and by noon, had collected almost 4,000 pounds of litter – an average of 57 pounds per person. The group divided into four teams, covering US 78 from Blue Eye Baptist Church toward Lincoln and Shell gas station toward Riverside ; Colvin Road; and Lock Four Road.

“At Honda, we believe our responsibility as a company extends beyond making products that people want to own. That’s why it is rewarding to have so many Honda associates donate their Saturday morning to helping cleanup roadside litter in Lincoln ,” said Chuck Ernst, HMA Senior Vice President. “A strong commitment to the environment is at the core of our business philosophy.”

“Honda’s commitment to this effort through its financial support and associate volunteerism is deeply appreciated by the thousands of volunteers statewide that dedicate their time and resources to making Alabama truly ‘Alabama the Beautiful,’” said Spencer Ryan, executive vice president of PALS.

“The pledge to the 2008 Spring Cleanup, as well as the active corporate participation in the Adopt-A-Mile program, certainly solidifies Honda as an organization dedicated to Talladega County and the entire state of Alabama.,” Spencer said. “It is a pleasure working with this community-minded corporation as we strive for a cleaner and more beautiful Alabama. ‘Don’t Drop it on Alabama’ and other PALS initiatives would not be possible without the support of outstanding organizations such as Honda.”

Alabama PALS is dedicated to working with Alabama communities to promote a cleaner and healthier Alabama by providing programs that address litter prevention, cleanup and litter control. The first spring cleanup event took place in 1989.

In February, HMA became an active partner with Alabama PALS through its “Adopt A Mile” program. In an effort to “Keep Alabama The Beautiful,” HMA has committed to picking up roadside litter along U.S. Hwy 78 near the Line 2 associate entrance.

“With corporate partners like Honda, the state’s roads and highways will remain cleaner – and safer,” said Spencer Ryan, executive vice president of PALS. “In addition to keeping our roadsides looking nice it saves the state money by reducing the cost it takes the Department of Transportation to maintain cleanup efforts.”