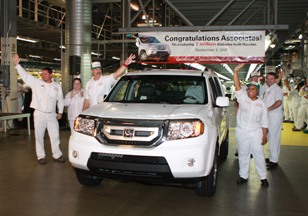 The roll-off of HMA’s 2 millionth vehicle comes less than nine years after the start of mass production at the $1.4 billion facility on Nov. 14, 2001.

“The commitment and dedication of each associate has allowed HMA to quickly reach this production milestone and meet the needs of a record number of customers,” said Nobu Sanui, HMA President and CEO. “In October of 2006, we celebrated building the one millionth HMA Honda. And today, less than four years later, we have built our two millionth Honda in ‘Sweet Home Alabama.’”

HMA is the sole North American production source of the Pilot sport utility vehicle, the Odyssey minivan, the Ridgeline pickup and the V6 engines that power each vehicle. HMA also shares production of the Accord V6 Sedan with the Marysville Auto Plant in Marysville, Ohio.

On Aug. 31, 2010, HMA began production of the all-new 2011 Odyssey minivan, which is scheduled to arrive at dealerships in late September. HMA employs more than 4,000 associates at its 3.5-million-square-foot Lincoln facility and has the capacity to produce as many as 300,000 vehicles and engines each year.