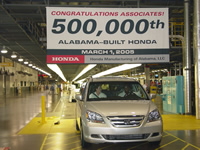 LINCOLN, AL – Associates at Honda Manufacturing of Alabama, LLC (HMA) today reached a production milestone at 10:10 a.m. with the completion of the 500,000th vehicle and V-6 engine built at HMA.

The production of the Silver Pearl Metallic 2005 Odyssey EX-L, equipped with leather interior and DVD Rear Entertainment Center, comes a little more than 39 months after the start of mass production on November 14, 2001 at Honda’s $1.2 billion facility.

“Our associates’ impressive ability to reach this production milestone so quickly has enabled Honda to meet the needs of a record number of customers,” said Rick Schostek, HMA vice president of business operations. “Even more impressive has been their commitment to provide these customers with products of the highest quality. We salute the accomplishments and determination of our outstanding team of associates.”

HMA is now the sole North American production source of the Odyssey minivan, a designation earned with the start of production of the 2005 model Odyssey last summer. In April 2004, HMA’s Line 2 facility began production of the Honda Pilot sport utility vehicle and is now capable of building both Odysseys and Pilots on the same line.

HMA employs more than 4,300 associates at its Lincoln facility. Combined production on two assembly lines at HMA’s 3.2-million-square-foot facility currently totals more than 1,100 Odyssey minivans and Pilot SUVs each day. At full capacity, HMA will produce a total of 300,000 vehicles and V-6 engines each year.