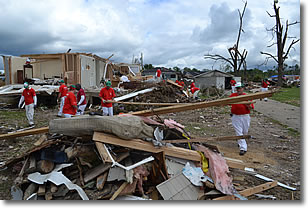 Located among the communities struck by the April 27 tornadoes, the associates of Honda Manufacturing of Alabama (HMA) have organized a number of activities to aid in relief and recovery efforts.

HMA has been using some of its non-production time to support tornado relief activities in areas near the plant, including outreach in Calhoun, Etowah, Jefferson, St. Clair and Talladega Counties. In just three weeks, more than 500 associates have gone out to a number of damaged communities, assisting with cleanup, organizing donations and distributing needed supplies to residents affected by the devastating storm.

“The tornadoes have touched all of us at HMA,” said Stephanie Hill Alexander who helps coordinate Honda’s community relations activities at the Lincoln plant. “We have a great team of dedicated associates and many are anxious to help our communities recover from the devastating storms.”

In addition to working in the communities, associates have also worked at area distribution centers, including both the Red Cross and Salvation Army Chapters of Calhoun and Jefferson County; Christian Service Mission in Birmingham and the Christian Love Pantry in Pell City, to sort and ship out donation items.

On May 9 and 16, two groups of more than 100 Honda production associates (200 total) spent their workday in the Concord community near Birmingham, where they assisted in clearing debris from damaged home sites.

On Saturday, May 14, HMA sponsored a volunteer workday to assist with recovery efforts in Calhoun County near the Ohatchee and Oak Grove communities. More than 180 associates and family members cleaned debris, moved tree limbs and organized donations for many of those impacted by the tornadoes in east Alabama.

HMA associates have also responded to community needs with personal donations of food, water, and other items, which have been collected at the Lincoln plant. Hundreds of items have already been distributed to local agencies for those in need.

Honda has also provided five vehicles - four Odysseys and one Pilot, which are produced at the plant - to be used in local relief efforts. The vehicles have been delivered to local United Way agencies serving relief efforts in Blount, Calhoun, Cherokee, Etowah, Jefferson, St. Clair and Walker Counties. And, an Odyssey is being used statewide through the American Red Cross.