Honda Associates Team Up to Clean Up 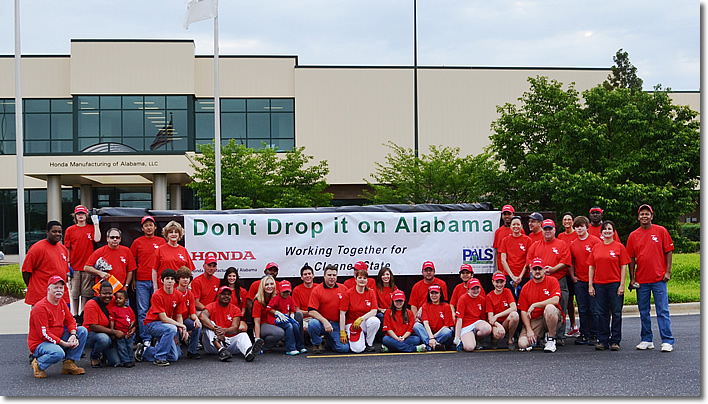 LINCOLN, Ala. – More than 60 Honda Manufacturing of Alabama (HMA) associates and family members took to the roads in Lincoln Saturday as part of the “Don’t Drop it on Alabama” 2012 Community Cleanup Day. The Honda volunteers – including Honda associates, friends and family members – picked up Roadside Litter along five miles of roads in Lincoln during the three-hour-long cleanup effort and together, collected hundreds of pounds of roadside debris.

“Honda has a strong commitment to the environment – both in the products we make and to the community,” said Fran Pope, HMA special events coordinator. “It was very rewarding to have Honda associates and their family members donate their time on a Saturday morning to help improve our community.”

In 2008, Honda became an active partner with Alabama PALS (People Against a Littered State) through its “Adopt A Mile” program. In an effort to “Keep Alabama The Beautiful,” HMA has committed to picking up Roadside Litter along U.S. Hwy 78 near Honda’s 3.5 million square foot facility.

Once again, this year Honda teamed up with Alabama PALS and the Alabama Department of Transportation to collect Roadside Litter from north and south of Honda Drive from the intersection of U.S. 78; along the edge of Colvin Road; and U.S. 78 – from the Honda Drive intersection toward downtown Lincoln.

Hundreds of pounds of household waste – including scrap tires, metal, electronics, batteries, paint cans and used oil – were also collected for recycling during the automaker’s annual “Recycle Day” Saturday at the Lincoln facility.

“At HMA, our main focus is to minimize the amount of waste we generate and to responsibly manage the waste that we do generate,” said Mark McNally, environmental manager at HMA. “Our Recycle Day event helps spread Honda’s commitment to the principle of “reduce, reuse and recycle,” and it’s a tremendous reflection on the commitment and continuous effort of Honda associates to reduce waste.”

Honda Manufacturing of Alabama became the first zero-waste-to-landfill auto plant in North America at the outset of production in 2001. HMA has the capacity to build more than 300,000 vehicles and engines each year, but has sent no waste to a landfill.

HMA employs more than 4,000 associates at its $1.7 billion facility in Lincoln which produces the Odyssey minivan, the Pilot sport utility vehicle, the innovative Ridgeline pickup truck and the V-6 engines that power each vehicle. In 2013, HMA will add production of the Acura MDX luxury sport utility vehicle to its operations.