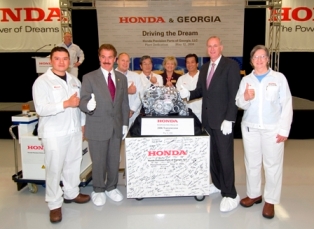 TALLAPOOSA, Ga.—Honda Precision Parts of Georgia, LLC (HPPG) today celebrated the start of mass production of five-speed transmissions by announcing plans to expand production capabilities at its west Georgia facility, which will increase investment to $150 million and employment to 440 associates.

The increased investment of $50 million will add aluminum die-casting and machining and other in-house production capabilities. The investment will also increase the footprint of the facility by 100,000 square feet to a total of 350,000 square feet.

“This additional investment reflects the dedication and commitment of our associates to build quality products for our customers and has made further expansion in Georgia the right choice for Honda,” said HPPG President Nobu Sanui. “The transmission is the key part of a vehicle that takes the power of the engine and uses it to drive the power of the vehicle. In a similar way, we hope HPPG can take the power of Tallapoosa and use it to drive the future dreams of both the state of Georgia and Honda.”

HPPG is Honda’s 13th major plant in North America. Reflecting Honda’s strategy to base powertrain production near vehicle production for synchronous assembly, the plant will initially support production of Honda Odyssey minivans and Pilot sport utility vehicles at Honda Manufacturing of Alabama, LLC (HMA) in Lincoln, Ala., 60 miles west of the Tallapoosa plant. At full capacity, HPPG will produce more than 300,000 automatic transmissions per year.

Alabama is the sole production source of the Odyssey minivan. It also produces the Honda Pilot SUV and has the capacity to produce 300,000 vehicles and V6 engines per year.

Including the new transmission plant in Georgia , Honda’s investment in North American production, R&D and marketing operations totals more than $8.5 billion. Using domestic and globally sourced parts, Honda has the annual capacity to produce 1.4 million cars and light trucks in North America at five auto plants in the U.S., Canada and Honda began operations in the U.S. in 1959 with the establishment of American Honda Motor Co., Inc., Honda’s first overseas subsidiary. Honda now employs more than 33,000 associates in North America.