LINCOLN, Ala. – The all-new, Alabama-built 2009 Honda Pilot rolled off the assembly line today at 10:05 a.m. in Lincoln to the cheers of more than 1,500 associates at Honda Manufacturing of Alabama (HMA).

“Today we mark a significant milestone – the launch of an all-new Pilot built by one team, with one goal and built only in sweet home Alabama,” said Hiroshi Sasamoto, president and CEO of Honda’s Alabama operations. “I salute the accomplishments of all HMA associates and your commitment to building products of the highest quality for our customers.”

A brief celebration at the end of the assembly line marked the start of mass production of the new Pilot. HMA is the exclusive global production source of both the Pilot and the Odyssey minivan. The Lincoln plant also produces the V-6 engines for each vehicle. Early next year, HMA will add a third model to its production lineup – the Ridgeline pickup truck. 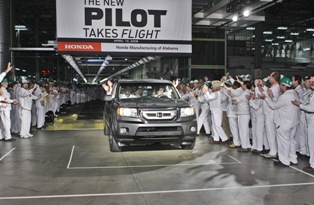 The new Pilot received rave reviews from Honda’s top U.S. engineering designer.“You have built an outstanding vehicle. This Pilot is all business. It’s impressive on the outside, the inside and underneath,” Frank Paluch, vice president of Automotive Design at Honda R&D Americas in Raymond, Ohio, told the Alabama associates minutes after the first Pilot rolled off the assembly line.

Paluch was the lead project engineer on the design of the first generation Pilot, which was introduced in the summer of 2002 as a 2003 model. Since its introduction, almost 750,000 units of the Pilot have been sold.

“When our team at Honda R&D Americas looked at creating a second generation Pilot, we knew we had a solid foundation to build upon. And we believe we have advanced the second generation model in every way,” Paluch said. “This second generation Pilot is designed to be an ‘intelligent adventure vehicle’ by meeting the practical needs of a family with its eight-passenger seating and offering bolder SUV styling, a more clever interior package and advanced technologies for safety, fuel efficiency and convenience.”

HMA builds the Odyssey minivan on both Line 1 and Line 2, while Pilot sport utility vehicle is built only on Line 2 at the $1.4 billion Lincoln facility. Annual production capacity is 300,000 vehicles and V-6 engines.