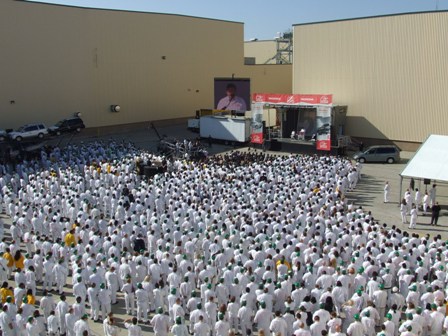 LINCOLN, AL – More than 3,000 Honda associates gathered together for the first time in an open courtyard between Honda’s Line 1 and Line 2 operations at the 3.2 million-square-foot facility. Honda stopped production at the entire facility to gather together for a ceremony celebrating the fifth anniversary since the start of production in Alabama on Nov. 14, 2001.

A highlight of the event was the ceremonial shipping of HMA’s 1 millionth vehicle, a Midnight Blue Odyssey EXL that was built at the plant on Nov. 3, 2006. Eight Honda associates – representing the major business and production divisions at the plant – were congratulated by Alabama Gov. Bob Riley as they exited the vehicle. Moments later, the Odyssey was loaded onto a cargo carrier and on its way to a Honda dealership.

“Numbers and milestones measure results, but it is our people – our Honda associates – who are the driving force in all these accomplishments,” said Rick Schostek, senior vice president at HMA. “I know it has only been five years, but it has been such a natural fit – and such a successful venture – that it is difficult to imagine Honda without Alabama, or Alabama without Honda.”