Production of Accord V-6 Sedan to Begin in mid-2009 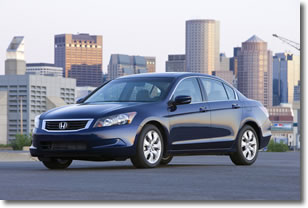 LINCOLN, Ala. - Honda Manufacturing of Alabama, LLC (HMA) today announced it will add production of the Honda V-6 Accord sedan to its lineup of the Odyssey minivan, Pilot SUV, and the Ridgeline pickup truck.


Production of V-6 Accord sedans will shift from Honda’s Marysville Auto Plant in Ohio to Alabama by mid-2009. The Accord V-6 sedan will become the fourth model produced on the plant’s two assembly lines. This will be the first time the Alabama plant has produced passenger cars since it began production of the Odyssey minivan in November 2001.


“The addition of the Accord V-6 Sedan to our flexible production operations further demonstrates Honda’s confidence in our Alabama operation and, specifically, in our Alabama associates,” said HMA President and CEO Hiroshi Sasamoto. “Adding the popular Accord as the fourth model in our production lineup will strengthen the stability of Honda’s operations in Alabama.”


Sasamoto officially told Honda’s 4,500 Alabama associates that the production of the Accord V-6 sedan would transfer to Alabama during plantwide meetings today in Lincoln.


The popular Honda Accord, for a generation of Americans, has served as the benchmark sedan in safety, quality, value and style.


HMA now produces the Odyssey and Pilot and, earlier this year, announced plans to transfer production of the Ridgeline to Alabama, from Honda’s auto plant in Alliston, Ontario, Canada. Annual production capacity at HMA will remain at 300,000 vehicles and V-6 engines.


The addition of Accord V-6 sedan production in Alabama, will enable the Marysville Plant in Ohio, to further increase production of the Accord 4-cylinder sedan.


For the past decade, Honda has worked to establish flexible manufacturing operations in North America with the ability to align production lines with customer demand. The addition of Accord production to HMA will allow Honda to better meet the requirements of the North American market. Pre-production trials of the Accord V-6 sedan, in which vehicles are built during equipment verification tests, are expected to begin at HMA in the spring of 2009.


In order to prepare for the launch of Ridgeline and Accord production and to adjust output to current market conditions, HMA will reduce light truck production by about 22,000 units through the end of the fiscal year ending March 31, 2009. The production adjustments will take place on Fridays in November and the week of Thanksgiving. Additional adjustments will be made in February and March 2009.