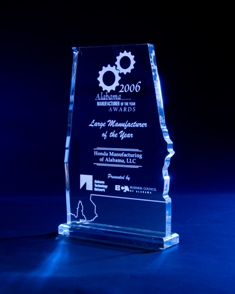 LINCOLN, Ala. – Honda Manufacturing of Alabama , LLC, has been named the 2006 Alabama Manufacturer of the Year by the Business Council of Alabama, the Alabama Technology Network and the Chamber of Commerce Association of Alabama.

“In just five short years, our company has achieved many milestones and enjoyed success in one of the most competitive periods ever faced by the auto industry. Our achievements are based on the foundation of our Alabama associates who have embraced Honda’s commitment to efficiency, creativity and teamwork to achieve the highest work standard in the world,” said Rick Schostek, senior vice president of business operations at HMA. “This honor is accepted as a tribute to the dedication of the 4,500 associates of Honda Manufacturing of Alabama to produce high quality products that exceed the expectations of our customers.”

During 2005, HMA achieved its stated production capacity of 300,000 vehicles and V-6 engines per year, capping a nearly five-year period of initial start-up and expansion. To date, HMA has produced more than 850,000 vehicles and V-6 engines. By the end of 2006, it will produce its 1 millionth Alabama-made vehicle. HMA is responsible for more than 31 percent of Honda’s overall U.S. production and more than 81 percent of Honda’s light truck production.

Other milestones for 2005 include:

The Manufacturer of the Year awards are presented in three size categories to ensure the fair recognition of all applicants regardless of the size of their work force. Winning manufacturers are selected by an independent panel of judges who look for demonstrations of superior performance in the areas of customer focus, employee commitment, operational excellence, continuous improvement, profitable growth and investment in training and retraining.

The BCA is a statewide business association representing the interests and concerns of nearly 5,000 Alabama businesses and industries that employ approximately 750,000 Alabamians. Manufacturers comprise the largest single segment of BCA’s membership.

The Alabama Technology Network is a division of the Alabama College System, partnering with the University of Alabama System, Auburn University and the Economic Development Partnership of Alabama. The network operates 14 centers throughout the state to deliver training and technologies to existing industries with the goal of enhancing the global competitiveness of Alabama manufacturers.

$1.27 billion facility in Lincoln is the exclusive global production source for the Odyssey minivan. The facility also produces the Honda Pilot sport utility vehicle and builds the 3.5 liter V-6 engines that power both products.