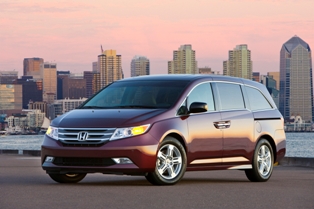 TORRANCE, California – The all-new 2011 Honda Odyssey has earned the National Highway Traffic Safety Administration’s (NHTSA’s) best-possible Overall Vehicle Score of five stars and is one of the first two vehicles ever to earn five stars in each seating position for all three crash tests, each crash test category and the overall rating, American Honda Motor Co., Inc., announced today. The Odyssey joins the 2011 Accord Sedan as one of the few vehicles to date that achieves the federal government’s best-possible five-star Overall Vehicle Score and five stars in the combined frontal and side crash safety ratings.The Odyssey achieved its top Overall Vehicle Score with five-star ratings for the frontal crash safety test and both side crash safety tests in all evaluated front and rear seating positions and scenarios. Additionally, the Odyssey received four stars for the rollover rating , the highest achievable in the light-truck vehicle class using the program’s measurement methodology.

The newly introduced Overall Vehicle Score is part of the federal government’s New Car Assessment Program (NCAP) that is first being applied to 2011 models. As a convenience to new car shoppers, the Overall Vehicle Score represents the combined results of the overall ratings from the frontal crash tests, the side crash tests and the rollover-resistance into a single, summary score between one and five stars. Additional information is available at www.safercar.gov.

Overall, the Odyssey improves for the 2011 model year with greater interior functionality, a more distinctive style and higher fuel economy. Significant enhancements to the interior include a new “3-mode” second-row seat design that is more comfortable for center passengers (Odyssey EX and above). A more powerful and efficient 3.5-liter i-VTEC V-6 engine features Variable Cylinder Management (standard on all models for 2011) and produces 248 hp while delivering an EPA-estimated city/highway/combined fuel economy of 19/28/22 mpg on Odyssey Touring models.

The 2011 Odyssey is truly an American-made vehicle – designed, engineered and assembled in the United States. The Odyssey is produced exclusively at Honda Manufacturing of Alabama (HMA) using domestic and globally sourced parts.