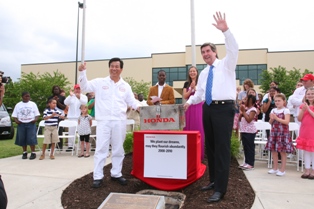 LINCOLN, AL – Alabama Gov. Bob Riley joined Lincoln school students and community leaders at Honda Manufacturing of Alabama Tuesday to raise a 10-year time capsule and celebrate a decade since the start of construction at the $1.4 billion facility.

The time capsule was presented to Honda officials on April 25, 2000 by students at three Lincoln schools to commemorate the start of construction and to memorialize a slice of life in Lincoln at the time of the groundbreaking.

Nobuyuki Sanui, President and CEO of HMA and Gov. Bob Riley lift the time capsule as Honda Manufacturing of Alabama celebrated ten years since groundbreaking and building of their facility in Lincoln, Ala. Click here to see highlights from our 10th Anniversary of Groundbreaking event.

An inscription on the time capsule said, “We plant our dreams. May they flourish abundantly.” More than 25 items were packaged in the time capsule, including t-shirts and yearbooks from Lincoln Elementary School, Drew Middle School and Lincoln High School. The capsule also contained a “Growlithe” card from the popular Pokémon card game.

“I would like to congratulate all our associates for the teamwork, dedication and commitment to our customers that has made the dream of HMA come true,” said HMA President Nobu Sanui. “I would also like to thank our neighbors – the people of Lincoln, Talladega County , and the State of Alabama – for your partnership. I am very proud of what HMA has achieved during the past ten years.”

HMA employs more than 4,000 associates at its Lincoln facility and is the sole North American production source of the Odyssey minivan, the Pilot sport utility vehicle, the Ridgeline pickup truck and the V-6 engines that power each vehicle. The plant also shares production of the Accord V-6 Sedan with the Marysville Auto Plant in Marysville, Ohio. Capital investment at the plant now totals more than $1.4 billion at the 3.5 million square foot facility with an annual production capacity of 300,000 vehicles and engines.

Some of those same students, community leaders and guests who attended at that groundbreaking day 10 years ago returned to HMA for a brief look back at Lincoln in the days before Honda. Contents of the time capsule were placed on display for guests to look through and reminisce on how some things have changed in just 10 years.

Jessica Meek Popham, a former Lincoln High School student who spoke at the original groundbreaking ceremony in 2000, said there has been much growth in Lincoln , thanks to Honda. “In the garden that is Lincoln, Alabama, the citizens are flourishing as never before and we are grateful to Honda Manufacturing of Alabama for its huge contribution to our community,” Popham said. Popham is now a pharmacist in Anniston.

During the groundbreaking ceremony on April 25, 2000, Honda revealed that the first vehicle to be built at the new plant would be the popular Honda Odyssey minivan. Though “the big day” – the day the plant would build its first vehicle suitable for sale – was some 18 months away, groundbreaking day still holds fond memories for Lincoln area residents and HMA associates who have followed the company’s progress from the very beginning.

During the past two years – in the midst of the most severe downturn in North American automotive production history – Alabama’s Honda plant continued to grow with the addition of two important Honda vehicles to its Lincoln lineup. Production of both the Ridgeline pickup truck and the Accord V-6 Sedan was added to HMA’s manufacturing lineup in 2009. The lineoff of the first Honda pickup truck to be built in Alabama occurred Feb. 16, 2009 and was followed just five months later with the lineoff of the first Alabama-built Accord V-6 Sedan on July 17, 2009 in Lincoln. HMA is Honda’s largest light truck production source. HMA’s flexible manufacturing system allows the Alabama facility to build multiple models on the same assembly line.