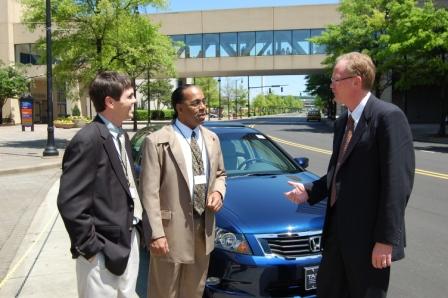 BIRMINGHAM, Ala., April 16, 2009 – Honda leaders shared their direction for overcoming the difficult economy at the company’s annual supplier conference Thursday, saying that this time of challenging business conditions provides a unique opportunity to increase flexibility and make significant operational improvements.

Honda also recognized 60 of its suppliers for their top performance last year in the critical areas of quality, on-time parts delivery and productivity improvements. With one triple and 10 double award recipients, Honda presented 72 awards to its North American parts suppliers, including KTH Leesburg Products in Leesburg and McCord Leakless Sealing Corp. in Athens.

“Even though economic conditions continue to challenge the automobile industry, Honda is working closely with our supplier partners locally and in North America to carefully manage our business and strategically meet the needs of our customers,” said Mike Lapham, purchasing manager for Honda’s Alabama operations.

Honda expects the market to strengthen in the future, according to Lapham. “The production adjustments that Honda and its suppliers are making will better position Honda to meet customer needs during an economic recovery,” Lapham said.

It is important to move forward with a long-term viewpoint, while also taking action with speed and decisiveness in the current market situation, added Larry Jutte, Honda of America senior vice president and head of the company’s North American purchasing operations.

“In North America, Honda and our suppliers have implemented production adjustments that would have been unimaginable even six months ago,” he said. “The decisions we have made, including moving product mix between plants, are the result of careful and strategic management. The concept of speed and flexibility is an undercurrent running throughout our entire production network in North America.”

Honda implemented its flexible manufacturing system nearly a decade ago to speed response to customers. At that time, Jutte said, the characteristics of speed and flexibility were considered something of a luxury. “Now it is a fundamental requirement for survival,” he said.

Using its flexibility, Honda recently transferred the Ridgeline pickup truck from Canada to Alabama and moved Civic production from Ohio to its new plant in Indiana. This summer, V-6 Accord sedan production will begin at Honda Manufacturing of Alabama as Honda increases production of four-cylinder Accords in Ohio and reduces the number imported from Japan.