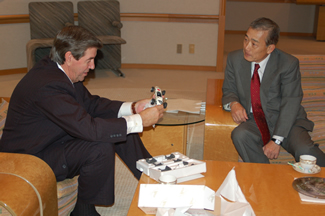 Honda employs 4,500 associates at its vehicle and engine operations in Lincoln, Ala. Honda Manufacturing of Alabama, LLC (HMA) produces the Odyssey minivan, Honda Pilot SUV and V-6 engines on its two assembly lines. The automaker has invested $1.27 billion in Alabama and now has the annual capacity to produce more than 300,000 vehicles and engines.

Gov. Riley is participating in the 2005 Southeast U.S.-Japan Association meeting in Tokyo, Oct. 16-18.

The vitality of the Association is made clear by the 29 annual joint meetings that have been held since its launch, with meetings alternating between the southeast U.S. and Japan. Meetings provide opportunities to renew old friendships and forge new ones, and always attract over 500 participants from both the SEUS states and Japan , including private and public sector representatives, and state governors of the seven southeast states.