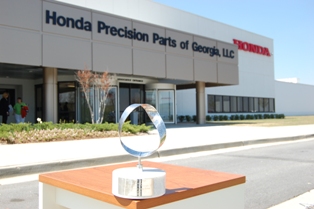 ATLANTA, Ga. (April 17, 2008) – Honda Precision Parts of Georgia, LLC (HPPG) has been named the 2008 Manufacturer of the Year in Georgia. The honor came April 17 in the Governor’s annual awards luncheon in Atlanta.

“Being recognized as the Georgia Manufacturer of the Year has a very special meaning to us because it recognizes the achievements of our associates, our company, how we conduct our operations, and the commitment we have to be an active partner in our local community,” said John Spoltman, HPPG vice president and plant manager. “The achievements of HPPG are based on the strength of our associates, who have embraced Honda’s commitment to efficiency, creativity and teamwork to achieve the highest work standard in the world.”