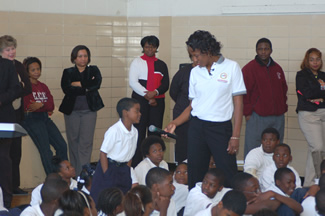 BIRMINGHAM, Ala — One of greatest female athletes of all time – Jackie Joyner-Kersee – visited Birmingham Oct. 27, 2005 to meet with students at Birmingham’s Whatley K-8 School and George Washington Carver High School.

Joyner-Kersee shared her story with Birmingham students of how she overcame poverty growing up in East St. Louis and how she went on to become a six-time Olympic medalist.

Sponsored by Honda Manufacturing of Alabama, LLC (HMA) and American Honda, Joyner-Kersee’s visit to the Magic City was designed to motivate students in Birmingham City Schools as part of its Partners in Education Program.

“Honda and Jackie Joyner-Kersee believe in using the power of dreams to set and achieve ambitious goals,” said Mark Morrison, HMA manager of corporate affairs and communication. “Honda believes in approaching new challenges without the fear of failure. We are honored to build relationships with like-minded individuals such as Olympic champion Jackie Joyner-Kersee.”

Honda and Joyner-Kersee have been partners for more than 15 years, sharing a similar approach of using dreams to achieve success.

“Jackie Joyner-Kersee is a person who has overcome incredible odds and achieved greatness,” said Dr. Peggy Sparks, executive assistant for community affairs for Birmingham City Schools. “She did this by not giving up. This is what we teach our students.”

Sparks said students at Whatley K-8 and Carver High School studied Joyner-Kersee’s inspiring history prior to her visit to Birmingham. The students were required to prepare questions to ask Joyner-Kersee and followed-up her visit with writing assignments. 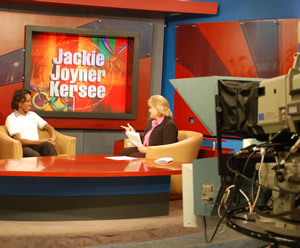 Joyner-Kersee spoke to more than 300 students and faculty members at Whatley and addressed an audience of more than 1,500 at Carver. She also made several media appearances and participated in local television, radio and newspaper interviews. Additionally, she received the “Key to the City” from Birmingham Mayor Bernard Kincaid and was honored with “Jackie Joyner-Kersee Day” by the Jefferson County Commission.

An active Partners in Education member with the Birmingham City Schools, Honda employs 4,500 Alabama associates at its vehicle and engine operations in Lincoln, about 35 miles east of Birmingham. Honda produces the Odyssey minivan, Honda Pilot SUV and V-6 engines on its two assembly lines. The automaker has the capacity to produce more than 300,000 vehicles and engines annually at its $1.27 billion Alabama facility.